DUE TO THE COVID19 SITUATION THERE WILL BE CHANGES AS CLUB POLICIES EVOLVE. PLEASE KEEP CHECKING HERE.

THE TODMORDEN ALLIANCE IS CANCELLED. 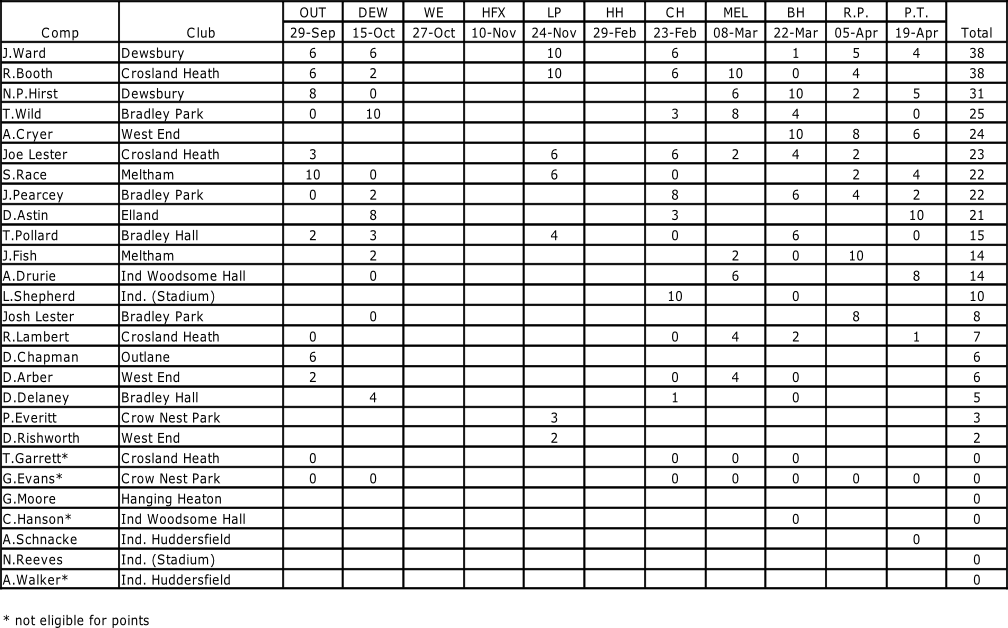 Gareth Evans and Mark Campbell (8) of Crow Nest Park produced an exceptional score of 47 points to win a very high scoring pro-am while the am-am was won by Ian Saxton (6) and Steve Hanley (17) of Meltham with 41 points.

The first Alliance of the season was delayed about 10 minutes while the fog lifted enough to see the first bunker but in this time Rob Booth of Crosland Heath lost his partner, David Ford, who dislocated his shoulder while warming up and Rob had to continue on his own. This did not prevent him continuing this year's good form as he led in the club-house on 42 points for a long time. The earlier starters playing in very damp conditions with heavy air were at a slight disadvantage as the mist cleared after a couple of hours and the afternoon was warm and sunny. The course was in excellent condition, the greens especially so, being receptive, smooth and fairly fast.

Gareth Evans had only played three rounds of competitive golf this year and was pleased to have 8 birdies and an eagle combining with Mark Campbell (8) for a winning score of 47 points. Second place in the pro-am went to Simon Race and Roy Johnson (17) of Meltham on 44 points, much helped by Roy's net eagle on short 16th. In third were Nigel Hirst and Fergus Barron (3) of Dewsbury on 43 points. Nigel eagled the 4th and Fergus had a net eagle on the 13th. Three pairings followed on 42 points. There was excellent support from the professionals with 12 playing in a small total of only 35 pairs.

Ian Saxton (6) and Steve Hanley (17) of Meltham put together a very tidy card of 41 points to just hold of the late challenge of Pete Newey (14) and Phil Sellen (13), Ind. Huddersfield, on 40 points, much helped by a fine net eagle by Phil on the 17th. There were three pairs on 39 points and a further three on 38.

The next Alliance is at Dewsbury District Golf Club on Thursday, 15 October.

Tom Wild of Bradley Park and Oliver Shaw (5) of Crosland Heath won the pro-am with 43 points, one ahead of Dave Astin and Tony Tighe (14) of Elland with two pairs a further point back. The am-am was won on count-back by Aaron Schnacke (plus2) and Rob Turner (6) of West End from Ray Attiwell (10) and Andrew Smith (17) of Ryburn on 42 points.

The early starters, which included both pro-am prize winners, were subjected to a few rain showers but as the afternoon progressed it became dryer and sunnier and the am-am prize winners had the best of the windless day. The course was soft and the receptive greens were reasonably fast.

The next Alliance is at West End Golf Club on Tuesday, 27 October.

West End Cancelled due to fog.

Ogden Cancelled due to excess of water.

Early Pro-Am leaders Rob Booth and Chris L'Estrange (12) of Crosland Heath were joined on 43 points by late finishers James Ward and Jimmy Main (17) of Dewsbury, well clear of the field in the last Alliance of the year. The Am-Am was won by Richard Johnstone (13) and Fred Parker (16) of Meltham on 43 points from Mark Campbell (8) and Barry Seymore (15) of Crow Nest Park on a back nine count-back from Martin Clowery (12) and John Thompson (20) of Longley Park on 41 points.

With West End cancelled on the day due to fog and Ogden the day before due to and excess of water we were glad that Longley Park had recovered sufficiently from the previous weeks rain for the Christmas event to be held. The ground was wet but there was no casual water and the fairways, bunkers and greens were very good but the rough and fallen leaves made finding wayward balls difficult and at times impossible and this was reflected in the pace of play. All tees were on mats and getting the ball to stay on a tee peg could be difficult at times.

We had showers all day, heavier in the afternoon but there were a few sunny intervals and the wind was generally light. With a full field and slower than expected play the last few groups finished in poor light, the last in the dark although this did not prevent Adam Crum birdying the last hole.

The 8th hole, although stoke 5, produced 6 net eagles by L'Estrange, Johnstone, Thompson, Cassidy, Wallis and Wilson. Campbell had a net eagle on the 10th and Kendall on the 6th.

The next Alliance is at Hanging Heaton Golf Club on Tuesday, 9th February.

Hanging Heaton Cancelled due to excess of water.

Sunshine and a hole-in one at Crosland Heath

After three of the first six of this season's Alliances  were cancelled due to bad weather we had blue sky, sunshine, no wind and a dry course at last. This was enjoyed by a large entry of 67 pairs including 14 Professionals. Anthony Kendall playing off 20 from Longley Park had a hole-in-one with a 6 iron to the 12 th. This was his first and was celebrated in the usual way at the bar. There were also four gross eagles, 2 for Lee Shepherd, and one each for Gareth Evans and Steve Smith.

The greens staff at Crosland Heath had put the course into excellent condition, including “ironing” some greens to remove the frost. All greens were in play but from the forward winter tees and play was from mats on the fairways to protect the turf. Although the greens were still quite soft they were fast and generally true.

The Pro-Am was won by Lee Shepherd of Stadium Golf and Chris Lander (1) of Bradley Hall with 43 points on a very tidy card with 2 eagles and 4 birdies. Tied in Second place were Toby Garrett and John Dearden (20) of Crosland Heath and Gareth Evans and Nick Day (8) of Crow Nest Park on 42 points.

The Am-Am was won by a late entry who finished just before dark, Barry Seymore (15) and Chris Atkinson (12) of Crow Nest Park with a fine score of 45 points with 1 net eagle and 7 net birdies. In second were Jake Smith (14) and Andy Mellor (13) of Outlane on 42 points with an eagle and 6 birdies. A three way tie on 41 points for third was resolved on a back 6 count-back in favour of Chris Holmes (7) and Roy Johnson (16) of Meltham.

The next Alliance is at Meltham Golf Club on Tuesday, 8 March.

Gareth Evans scored the bulk of the points on the front nine and his partner Steve Aldeugeur (12) did likewise on the back nine for a winning 44 points for the Crow Nest Park pair. It was a similar story for Crosland Heath's Toby Garrett and Paul Crosse (12) just one point back on 43. Best club pro was Rob Booth with Geoff Newton (7) of Crosland Heath on 40.

The front nine was played to the temporary greens with oversize holes due to the overnight frost and all holes were played from the winter tees. Most of the winning scores came from the later tee times, maybe helped by the softer conditions. Drizzle in the morning was followed by a sunny period after lunchtime and then light rain for most of the afternoon.

The easiest hole was the first with two gross and eleven net eagles and a net albatross by Crosland Heath's  Michael Illingworth. The much shortened par 5 seventh produced three gross and four net eagles and in total there were 36 four points or better.

Many players were seen to be abusing the use of mats. Mats were required on the fairways from 150 yards in and optional on other closely mown areas. They were NOT to be used in the rough and preferred lies were not to be taken in the rough. One 4-ball continued using mats in the rough after being warned not to by other players. If a breach of the rules is seen and not corrected as per the rules of golf a written report must be given to the committee for action to be taken.

The next Alliance is at Halifax Bradley Hall Golf Club on Tuesday, 22 March.

In a break from the European Tour Chris Hanson was joined by Yorkshire Post golf reporter Chris Stratford (20) to card a score of 44 points to win the pro-am by 2 points from joint second placed Nigel Hirst and Carl Smallpage (5) of Dewsbury and Adam Cryer and Andy Cryer (10) of West End. Chris Stratford used his shots well to contribute  five net birdies to Hanson's 3.

Mark Campbell (8) and Nick Day (8) of Crow Nest Park edged the am-am with 42 points from seven pairs on 41 points. In second place on a back six count-back were Gary Atkin (10) and Paul Reynolds (13) of Outlane and in third were Jake Smith (14) and Michael Illingworth (13) of Outlane and Crosland Heath.

The recent dry spell had left Bradley Hall in good condition with just a few wet areas and the greens were firm and quite true. It was cold and overcast but with no rain and light winds.

The next Alliance is the Ron Parkinson Trophy at Todmorden G.C. On Tuesday 5 April.

As is usual at nine hole courses the field was split into morning and afternoon sections with distinctly different results. The morning players started in light rain on a very, very wet course with the wind gradually increasing in strength be become a full three club wind. Josh Lester (pro) & Luke Pilkington (1) of Bradley Park & Crosland Heath who were first out returned a remarkable score of 37 points and the am-am pairing of Graham Thornton (20) & Mike Clegg (17) of West End scored a fine 35 points. In the afternoon with no rain and brightening sky, falling wind and a drying course the scoring was much better with an average of 33 points compared to the morning average of 28.

Elland's Stan Gledhill had a fright on the first green when, as he stood over his put, another ball suddenly appeared plugged within a foot of his. This had been struck from the first tee, 335 yards away, by Fixby assistant Jack Pearcey.

The Ron Parkinson Trophy for the best score was presented to Evans & Campbell by Todmorden President, Steve Packer.

The next Alliance is the individual stoke-play competitions for the Page Trophy and the Roger Heap Cup at West End Golf Club on Tuesday 19 April. This will be followed by the AGM at which some rule changes will be discussed.

but sterling effort by West End greenkeepers produced a basically dry course. There was water in the rough and some greens had to be heavily sanded resulting in inconsistent speed but overall the course played well. We were blessed with a warm sunny day with no wind which may be why no-one pulled out of the second round.

In the Colin Swain Trophy for professionals Gareth Evans of Crow Nest Park was a clear winner with 69+68 for 137 from new professional Aaron Schnacke, independent Huddersfield, with 68+72 for 140 with Dave Astin of Elland in third with 71+71 for 142.

The Bradley Hall team of Reece Jennison (7), Steve Sandie (5) and Paul Caldwell (9) won the Emmie Smith Trophy with a score of 418 from Crosland Heath with 447 and Meltham with 449.

The 18 hole Roger Heap Cup was won by West End Captain Mike Holroyde (7) with a net 66 in his best gross score at his home club. In second place was Dave Mitcheson (14) of Bradley Park with 68, a good card spoiled by a quadruple bogie on the 14th and a double on 17. In third was Mark Campbell (8) of Crow Nest Park with a consistent card of 71.

Barry Isles was thanked for his efforts over the past many years as assistant and then secretary of the Alliance as he takes a years sabbatical. Simon Race, professional at Meltham, takes over as Alliance president for next season.

The Professionals Cup was presented to the joint Order of Merit winner James Ward of Dewsbury District who tied with the absent Rob booth of Crosland Heath and the Club Championship Cup to Crow Nest Park.