DUE TO THE COVID19 SITUATION THERE WILL BE CHANGES AS CLUB POLICIES EVOLVE. PLEASE KEEP CHECKING HERE.

THE TODMORDEN ALLIANCE IS CANCELLED.

The first event of the season had a disappointing entry of only 14 pairs on a day of sunshine and light breeze. The Marsden course was in excellent condition with fairly fast and very smooth greens.

The Am-Am section was won by the Marsden pairing of Paul Saxon and Peter Doolan with 37 points from Bernard Smith and Paul Stringer of Bradley Park on 36 points, a very creditable performance on their first visit to Marsden.

Last seasons Order of Merit winner Rob Booth, Assistant at Bradley Hall, was installed as President of the Alliance for the 2010/11 season.

The Am-Am section was won by Mick O’Hara (9) and Steve Pickup (14), Bradley Park / Castlefields, with 39 points on a countback from Adam Cryer (scr) and Andy Cryer , Ind (Woodsome) / Hebden Bridge.

The players enjoyed warm sunny weather in the morning, becoming cloudier in the afternoon. The course though was quite wet following the recent rains, the greens being particularly soft although reasonably paced.

Although the entry was well up from the season’s first event at Marsden it was still very disappointing and clubs are asked to promote the next events.

Halifax GC. The top prizes went to home teams in both sections with past and present Halifax pros taking the top 2 places in the pro-am.

The event was played in sunny weather with the wind picking up as the day progressed. The course was in fine condition with the only wet patches being off the fairways and the greens were quite firm despite the recent heavy rains.

The pro-am was won by Mike Allinson partnered by Ogden asst head greenkeeper Tony Gerard (6) with an excellent 44 points from Dave Delaney with Rabbits Captain John Broadbent (15) with 41 points on a back 9 countback from Gareth Evens and Mark Campbell (7) of Crow Nest Park.

The am-am section was won by the Halifax assistant Tom Pollard (4) and Nick Bennett (9) with 43 points. Runners-up were Mike Dempsey (10) and Pete Newey (15), Ind Huddersfield G.C. with 42 points on a back 6 countback from Halifax Captain David Peel (6) and Chairman Les Lawson (12).

Luke Pilkinton had 6 gross birdies with a net eagle on the long par 4 13th. The winners only bogy came at the par 3 5th as did the runners up with Rob Booth having 7 Birdies. 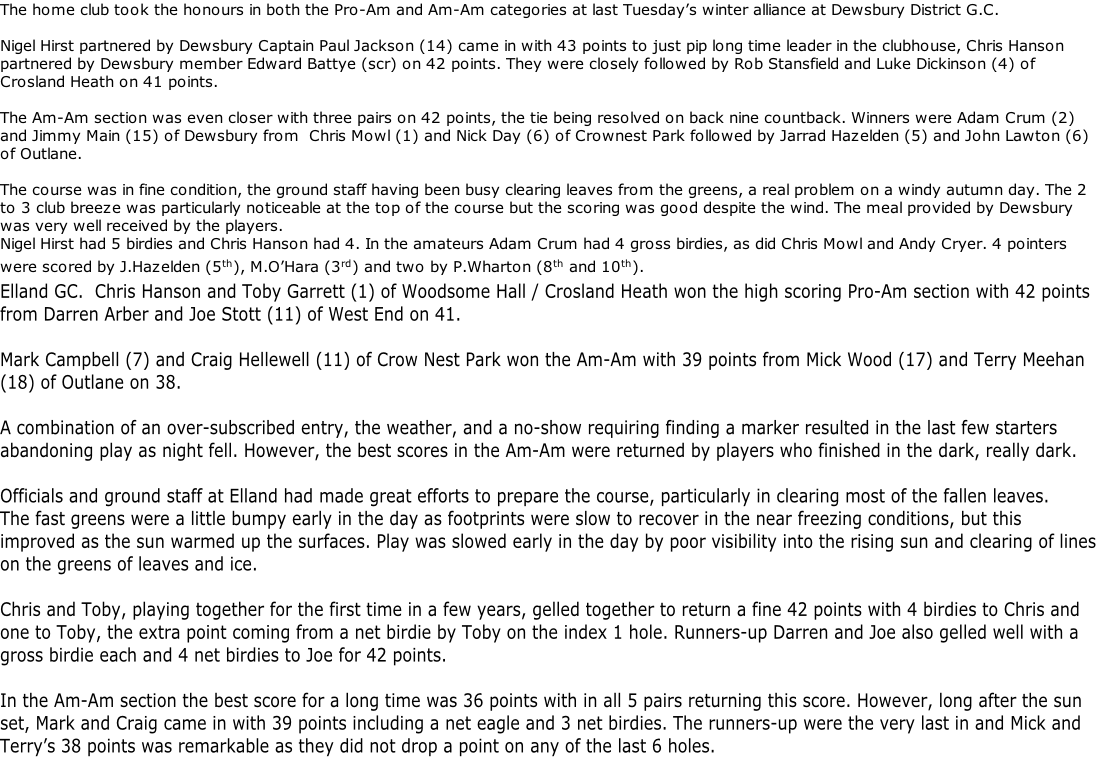 Crosland Heath GC.  It was a relief to find the snow had cleared and the mist lifted just before the start of what turned out to be a generally fine and still day.

Performance of the day must go to Adam Walker of Longley Park playing off 3 who shot a back nine gross score of 30 which included 6 birdies. With partner Steve Pickup of Castlefields off 15 they held the clubhouse lead with 44 points for 3 hours until the very last grouping produced a winning 45. The winning Am-Am pair was Mick Connolly (14) and John Wadsworth (8) of host club Crosland Heath with a very consistent round with no dropped shots and only one gross birdie, a 4 at the par 5 13th. Third place went to the Marsden pairing of Paul Saxon (6) and Pete Doolan (14) with 43 points. Only one gross eagle was recorded, by N. Sutton (7) of Outlane at the par 5 15th.

The pro-Am section was just as closely contested with Rob Booth and Andy Hare (3) of West End coming out on top with a score of 41 points from Jamie Coverley and Gary Ward (8) of Bradley Park on 40 points and Chris Hanson and A Appleyard (5) of Woodsome Hall / Bradley Hall on 39.

Longley Park GC.  The pro-am prize was shared by the home pro John Ambler and Captain Paul Phillips (11) and Alliance President Rob Booth and Steve Hopkinson (7) of Bradley Hall with 37 points. Rob now has a 2 point lead over Gareth Evens in the Pro Order of Merit.

Longley Park was in very good condition so early in the year with the greens being quite fast, consistent and true. The catering was excellent with food and drink before, during and after the round.

Conditions could hardly have been better at West End, more like summer than early spring, with sunshine and negligible wind. The course was in fine condition although play was from forward tees and some tee mats. The greens were quite fast and true, very good for the end of winter.

Scoring was generally fairly steady with not too many blobs or an excess of eagles.

The pro-am section was won jointly by Gareth Evans (scr) and David Wilcock (20) of Crow Nest Park and John Ambler (scr) and Adam Walker (3) of Longley Park with 41 points. Both pairs managed an eagle, gross on the 17th for Evans, chip in from 10yds off the green, and net on the 14th for Walker.

Blustery strong winds greeted the players at Bradley Hall but fortunately the predicted rain held off and later starters even had some sunshine although the wind did not abate much. The green-keepers had worked hard to get the course into very good condition for early season and play was from the back white tees and mats for the par threes. The greens were just slow enough to keep balls from being blown off the green but were still quite quick.

The Pro-Am section was won by the home pairing of Rob Booth and Andy Hare (3) with a very good 42 points made up entirely of 2 and 3 point scores. Second were John Ambler and Brian Stacey (11) of Longley Park with 39 points who had all the scores from 0 to 4. John’s eagle on the 480 yd 16th with a 3 wood, 5 iron and 30ft put, he claims to be his best 3 shots in a very long time. Third were Chris Hanson paired with Andy Appleyard (3) of the home club with 38 points.

Rob Booth now moves to the top of the Order of Merit with 63 points from Gareth Evans on 56 and Chris Hanson on 47.

Todmorden Golf Club presented the course in excelent condition for mid April and the contestants generally welcomed the fast greens. The weather was more like June than April with warm sunshine and a light breeze.

The am-am section was closely contested with Adam Walker (3) / Aaron Schnake (1), Longley Park / Ind Huddersfield, with 42 points on a card with 4 gross birdies and no bogies for a gross 4 under par round looked likely winners. However they were headed by  Mike Dempsey (10) / Pete Newey (15), Ind. Huddersfield, with 43 points. A further 43 points card was returned by Terry Makin (10) / Michael Hartley (10), Todmorden, who lost out on a back  9 countback.

The Ronnie Parkinson Trophy was presented to Dempsey and Newey by Todmorden Captain Vincent Korobczkc.

There is no change to the Pro Order of Merit with Rob Booth on 63 and Gareth Evans on 56.

On his first visit to Meltham G.C. Simon Garside of Willow Valley playing off 19 scored 70 and 71 to just hold off Alliance President Rob Booth, pro from Bradley Hall, on 72 and 70 and Adam Cryer of Hebden Bridge off scratch on 70 and 73 to win the Page Trophy. Early starter John Ambler of Longley Park looked to have the Professional Cup won with 72 and 73 until he was pipped by late starter Rob Booth.

The Club Team Trophy was won by Hebden Bridge.

Consolation prize for best first round went to Alliance Assistant Sec. Trevor Williams, Bradley Park, with 70 and best second round to Pat O’Flynn, Outlane with 71.

Meltham Golf Club presented the course in excellent condition producing a stern test of golf. The greens were true and quite fast and despite the dry conditions were receptive to well struck shots. The fairways were fast and very hard resulting in severe bounces which had to be allowed for. The morning was overcast with a cold wind but the afternoon was better with some sunshine and a lighter breeze.

This year the National Alliance Championship has moved north from the Midlands, were it has been held for the previous 4 years, to be hosted by the Halifax Huddersfield Alliance at Halifax Golf Club.

The championship trophy is contested by teams of 5 better balls with the best 4 scores to count. There is also an individual competition for the professionals with a prize fund of £1000 and prizes for the best pairs not in the team prizes.

The competition was played from the new Blue tees at Ogden which gives added interest to the start as the carry from in front of the clubhouse to the fairway is 200 yards and in front of a much larger audience than usual.

For most of the day Halifax Huddersfield were lying in second place on countback from East Lancs with 154 points but the last two teams out claimed the honours. The championship was won by Derbyshire 2 with 160 points from Nottinghamshire 2 who were 1 point behind on 159. A 40 point average over the new layout by players who had not seen the course before was a fine performance.

Next year this event will be held at Crosland Heath Golf Club.

A summary of the results is given below.